In a Smart Grid, EDNs play a radically different role than that played in traditional energy grids. In fact, the lack of a fixed and hierarchical structure of a Smart Grid EDN and the high presence of bidirectional flow due to distributed small-sized generators that can provide intermitting power (consider, e.g., those based on renewable sources as solar panels or wind micro-turbines on the roofs of houses) may lead to a degradation of the reliability of the overall EDN, with higher risk of load unbalance or outages. Hence, more coordination is required to manage line constraints, voltage levels, etc. than in the past, although it may be very difficult (or too expensive) to place measurement devices in all the interesting points of the network.

Moreover, the role of the DNO becomes much similar to that of the operators in long-distance energy transmission networks, as DNOs in the Smart Grid need to actively manage the EDN to prevent dangerous excursions outside given boundaries of operation, still providing the energy transmission services between the generators and the consumers connected. Also, the DNO needs to monitor the energy exchange between distribution and transmission networks.
The EDN Virtual Tomography (EVT) GIAS will explicitly support DNOs in keeping a close control over the overall state of the EDN, as it will permit to infer voltage, current, and other measures in points of the EDN not directly accessible by sensors. The input of this GIAS is the aggregate knowledge of the energy models (in particular, energy usage and generation data and predictions) of the houses connected to the various end-points of the EDN. This knowledge is provided by the DB&A GIAS described next. 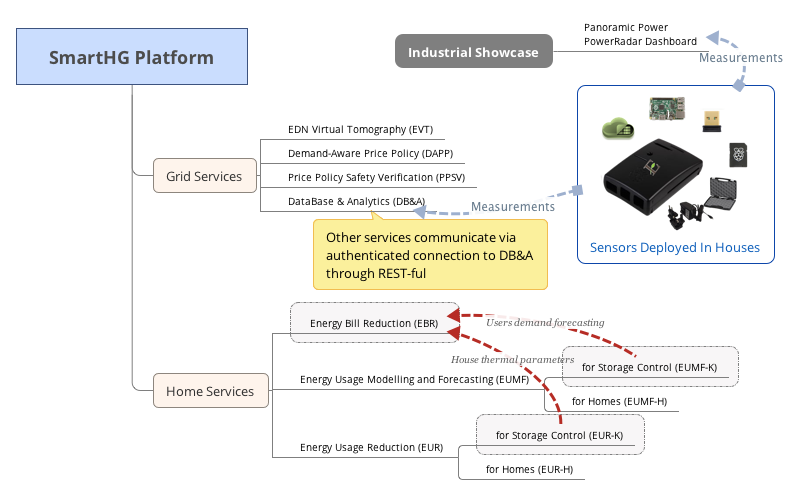